My paintings are hybrid. They are composed by groups of seemingly disparate elements connected through painting and forming a sort of ‘dynamic suspension’ (Morley 2013: 204), principally, between painting, hand weaving, pixel-based images, fractals and meditation. My work is a product of a South-American culture, which is, in itself hybrid. As Simon Morley observes, ‘forms of hybridity [are] found where cultures meet and merge’ (ibid. 207). For example, discussing about the South Korean pictorial movement Dansaekhwa, Morley explains that this mixed style of abstract painting emerged from the influence of ‘modern Western art but also [from] the inspiration of indigenous artistic technique, [and] of philosophical traditions’ (ibid. 195).

Similar to Dansaekhwa, my practice is rooted in Latin American indigenous practices of weaving and is also strongly influenced by modern Western paintings. It draws from other traditional practices such as hand knitting, painting, gilding, drawing and writing, and it is also affected by the filtering into the West of ‘East Asian philosophical and religious’ (Morley 2013: 204) practices. This latter is reflected in the use of gilding and some repetitive elements that are characteristic of meditation. In addition, my work draws from newer emergent technologies such as modern mechanised processes and digital media. Influences of traditional practices and media make my paintings convey a strong sense of process and materiality, whereas, impacts of technological and digital culture are reflected in the serial and repetitive elements that give machine-like qualities to my works.

For my PhD project I focussed principally on pictorial materials and methods. One of my goals was to build on a purist practice of painting in oil, acrylic and gilding on canvas, by introducing methods of hand weaving as well as digital technologies. An essential aggregated compositional method, whose structure is based on multiple accumulations of one monochrome unit, is found in woven pieces and pixel-based digital images. The particular resemblance between these methods encouraged me to search for a common territory, where elements of both could coexist mediated by painting. For that reason, as a reference to those technologies I decided to use a grid as a basic compositional structure for my works. I also integrated in my paintings elements such as counting and repetitive mechanised minimal movements, which are found in weaving methods.

Accordingly, my work has a principal focus on compositional methods. I call it gestural minimalism because it consists of the repetitive performance of a singular pictorial gesture, which is reduced, rhythmically regular and precise. As mentioned, it draws from mechanical movements typical of textile techniques, but it also evokes repetitive rhythms such as vibrations, breathing and meditation. I experience this practice as a sort of mantra that attunes with my body, triggering soothing affective sensations and peace of mind.

Gestural Minimalism: Developing a Pictorial Model in Light of Deleuzoguattarian and Enactive Theories

The purpose of my practice-based research was to define a model of abstract painting based on two frameworks: the Deleuzoguattarian philosophy of becoming and the enactive model of cognition (Varela et al. 1991). These two models have in common that they both propose a dynamic relation between individuals and the material world in which neither precedes the other, but rather they form a reciprocal relationship, co-creating each other, and continuously co-evolving and changing through time. The ideas presented by these dynamic models seemed entirely relevant to my approach to artmaking and so I felt encouraged to use them to analyse the relation between painters and the practice of painting.

The model which I developed through my research and which I propose through my work, emerged as a non-representational practice because it explores painting primarily as a material process and as an intellectual practice, of enacted and non-verbal material thinking (Carter 2004). In addition, in contrast to traditional conceptions of paintings that see it as a medium to represent a pre-existing world, I propose that it has the capacity to construct new ones, and hence, to produce concrete ontological repercussions. I developed this non-representational model weaving the aforementioned theoretical models together with my practice, which led to the development of a particular pictorial style that I call gestural minimalism.

A principal challenge of practice-based research projects is that the outcomes produced should be empirical demonstrations informed by relevant theories and not mere demonstrations, illustrations or applications of theory. Therefore, links between theory and practice should make them both ‘precede, prefigure and follow after one another’ (Pickles 2004: 29). In other words, theory and practice should work together and co-function as if they were maps of each other, shaping one another, activating meaning and influencing how the other is seen, explored and comprehended. One of the results of my research process is that I developed an understanding of painting as mixed ‘assemblages’ (Deleuze and Guattari 1988) of objects (material and abstract) and individuals, which are formed in real time, through actions (mobile and immobile) performed by the latter. The role of each participant in them is equally important for the outcomes produced. Hence, all the agents forming pictorial assemblages establish reciprocal interactions, co-functioning together in the shared aim of generating work.

Another principal referent of my paintings is fractal geometry. It informs the distribution of colours, the fragmentations of squared pictorial planes into smaller squares and the use of a ‘bottom-up’ compositional method based on aggregates of a same unit (Johnson 2001: 18). Fractal geometry was formalised in 1975 by Benoit B. Mandelbrot (1983). It extended classical Euclidean geometry, which dominated Western scientific and philosophical thinking for centuries. The fractal model mirrors distinctive features of natural formations, which are rough, broken and irregular. A fractal is a coarse and fragmented geometric form that can be eternally divided into smaller pieces. Each of the pieces in it are an identical, a similar or an akin smaller version of the whole form. Therefore, a fractal is a self-similar, iterated and detailed mathematical construct that presents a singular interrelation between the whole and the parts composing it. Every unit in a fractal can equally correspond to a whole and to a part of a bigger whole simultaneously. 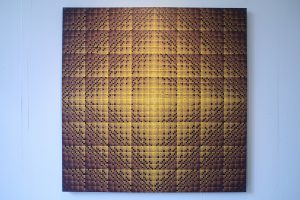 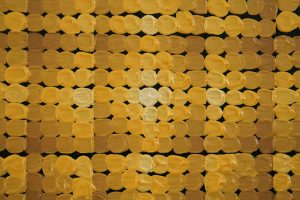 I begin composing my works by dividing the pictorial plane into a grid. Then, I place the marks produced through a repetitive brushwork inside each square of that grid and following a fractal sequence of colour distribution. The brushstrokes produced cover the entire surface of the canvas and are distributed evenly. Each mark is a small amorphous monochrome unit, whose imprinted textures and haptic properties can give glimpses of the tools used and the continuous repetitive minimal movements performed. The textures and distribution of marks in my paintings can also suggest things such as the sharp focus that I maintain throughout the practice and the proximity to the surface that I need to keep in order to make these precise and regular marks. This also shows that my approach to the pictorial plane is as a space to plan, organise, and to produce a previously elaborated and systematic plan.

Accumulations of strokes on the pictorial plane in my works make up fragmented surfaces with multiple variations of a brushstroke that together structure continuous chromatic degradations. Due to the level of detail, the strong interplay between parts and wholes is a marked characteristic of my paintings. From afar, the images look like continuous textured surfaces, however, close up the individuality of each stroke gains presence, and the aggregate nature of the compositions and the colour relations become apparent. Visually, my paintings suggest a variety of associations and references ranging from op-art work, such as Victor Vasarely (1906-1997) or Matilde Pérez (1916-2014) as well as light and water waves, the colour-light spectrum, and the woven surfaces and pixel-based digital images, which influence and inform their compositional methods. 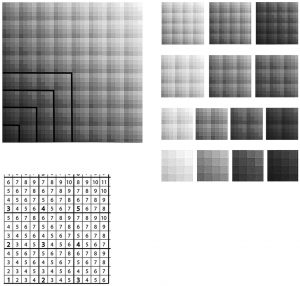 My works present a ‘careful analysis of the inner-relationships between colour and tone’ (Moszynska 1990: 103) and display ‘delicacy of tonal gradation’ (ibid.) of mixes between two colours. The organisation of tones in a system of fractal rules of combination produces iterative patterns of self-similarity between wholes and parts, where the relations between tones within a painting are repeated at different scales of magnification. More concretely, every squared section displays colour relations similar to the whole painting, as well as to bigger or smaller sections. As a result, vibrating visual rhythms seem to emerge from these compositions. For example, in Grace a light source appears to be radiating from the centre to the borders of the surface.

The mix of complementary colours in identical proportions results in a greyish or neutral colour. However, if these colours are mixed unevenly, ‘broken tones’ (Deleuze 2003: 89) emerge. Ronald Bogue (2003: 151) describes a broken tone as ‘a dull, muddy version of the dominant hue’. Broken tones are undifferentiated colours because, as they are mixtures, they will always be less distinguished than pure dominant hues. For that reason, these are extremely relational colours. For example, within the continuity of the tonal degradations connecting two colours in my paintings, it is hard to identify the exact point where mixtures experience a qualitative change and become closer to one colour or the other. In some of my works I intensify the elusiveness of colour perception by using metal leaf in the backgrounds, which reflects the lights and can dramatically affect the perception of colours.

Colour charts for Tone/Hue and Saturation – acrylic, pen and pencil on paper.