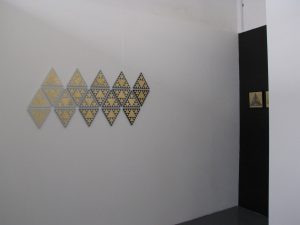 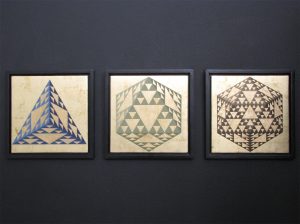 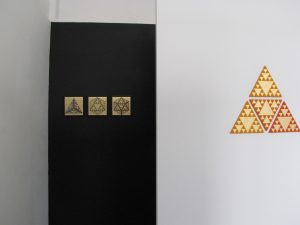 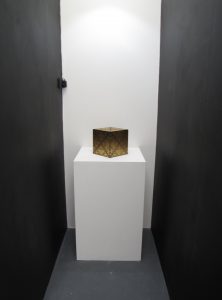 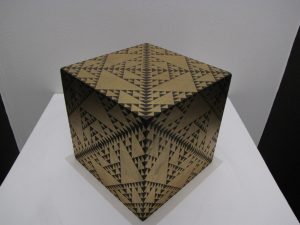 “In the first place […] re and earth and water and air are bodies. And every sort of body possesses solidity, and every solid must necessarily be contained in planes. […] Wherefore we must endeavour to con- struct the four forms of bodies which excel in beauty […] when the greater bodies are broken up, many small bodies will spring up out of them and take their own proper figures; or, again, when many small bodies are dissolved into their triangles, if they become one, they will form one large mass of another kind“.

“The first will be the simplest and smallest construction […] four equilateral triangles, if put together, make out of every three plane angles one solid angle […] and out of the combination of these four angles arises the first solid form. […] The second species of solid is formed out of […] eight equilateral triangles and form one solid angle out of four plane angles, and out of six such angles the second body is completed. And the third body is made up of […] twelve solid angles, each of them included in five plane equilateral triangles, having altogether twenty bases […] the isosceles triangle produced the fourth elementary figure, which is compounded of four such triangles, joining their right angles in a centre, and forming one equilateral quadrangle. Six of these united form eight solid angles, each of which is made by the combination of three plane right angles; the figure of the body thus composed is a cube“.

“To earth, then, let us assign the cubical form; for earth is the most immoveable of the four and the most plastic of all bodies, and that which has the most stable bases must of necessity be of such a nature […] and to water we assign that one of the remaining forms which is the least moveable; and the most moveable of them to re; and to air that which is intermediate. Also we assign the smallest body to fire, and the greatest to water, and the intermediate in size to air; and, again, the acutest body to re, and the next in acuteness to air, and the third to water. Of all these elements, that which has the fewest bases must necessarily be the most moveable, for it must be the acutest and most penetrating in every way, and also the lightest as be- ing composed of the smallest number of similar particles […] the pyramid is the solid which is the original element and seed of re; and let us assign the element which was next in the order of generation to air, and the third to water. We must imagine all these to be so small that no single particle of any of the four kinds is seen by us on account of their smallness: but when many of them are collected together their aggregates are seen“.

Plato (circa 360 BC.) Timaeus. Translated from Greek by B. Jowett 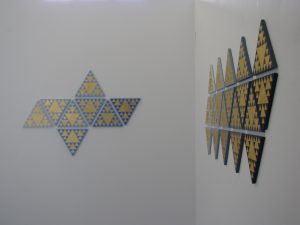 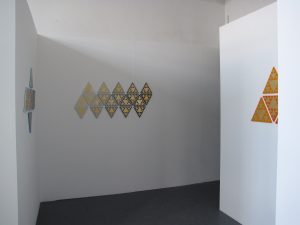 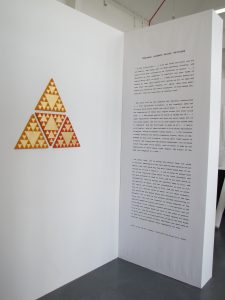 This project was shaped by the act of unfolding three of the Platonic Solids – Tetrahedron, Octahedron, Icosahedron – and a subsequent fragmentation of them into triangular modules. Each module was treated and planed in order to behave as independent units, however, maintain- ing the property of being able to compound a bigger and more complex whole when being rearranged all together.

The works produced here can be understood as hybrids between objects and paintings or a stage between two and three dimensional representation, that is to say: a fractal dimension expressed as a volume unfolded in the plane.

Besides, this project is an invitation for the viewer to construct the different Platonic Solids by virtually folding the nets and thus, the movement for construction is expected to take place in their minds. Overall, this work could be interpreted as an abstract approach to 3D construction, since the objects will remain as ideas, however, becoming present in an abstract way through imagination.

In terms of complexity and fragmentation, this work depicted ideas such as how different arrangements of the same – i.e. triangles – , can lead to different outcomes – i.e. platonic solids -. Conversely, how the platonic solids can be fragmented in same units. Also, how joining units can make a dimensional change from 2D to 3D and thus, a qualitative change of dimension can be experienced when the units are gathered to build a more complex whole. The three nets can act as a progression in complexity and, at the same time, as a progression in scales of fragmentation.